My awakening, "in earnest", began in the summer of 2005. (I say, in earnest, because reflecting back, We See how all of the life experience contributes to awakening.) So, in 2005, I was compelled to find a person, again... We had an encounter briefly in 1981, for 8 days only. It is important to know, that I fled from this person in fear. The feeling I had at that time was: “I hope I never see this person again…’good riddens!’ 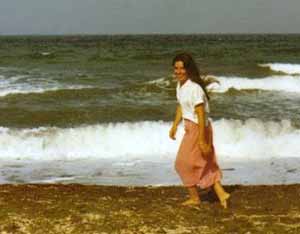 It is a complex story to tell, but suffice it to say... in 2005, the awakening manifested suddenly, with several months of euphoria... likened to energy streams that I have heard other people describe! What occurred was a re-connection with this person through telepathy, empathy, synchronicity…much more than I can define. He lives in Sweden. I live in Massachusetts. Over 3000+ miles between us, and yet we experienced this INTENSE energy simultaneously!

Lucid dreams, life review episodes, synchronicities...proceeded the awakening. EVERYONE, except one person and my kids, thought I was crazy... in a sense, many still do!! HA!

After the Pre-connection phase, I discovered his mailing address via intuition and synchronicity and the computer. I mailed him a brief letter, asking him: if he remembered me to send me an email. It took about 2 days for the letter to arrive to him (the first letter in a series of 27 choices I intended, were he not the right person). We wrote to each other through emails… this initiated even greater awakening, which continued from this point on, for several months(and years)… I was living my life situation, at home with my 2 kids and husband, In an altered state. Something that my husband and friends could not comprehend. Much confusion and pain got kicked up during this time period. There still exists, much misunderstanding on the part of these folks, except for my kids.

There existed a force that compelled me to do this, unlike anything I had ever known… to re-connect with this person, in a profoundly life-altering way. We became teachers to each other. Helping each other in ways that were impossible to realize at the time it was occurring.

The Beauty I have Seen through this connection is immense. In conjunction with first reading "The Diamond in Your Pocket" by Gangaji in August 2005, I was catapulted In To my LIFE! I Learned of ET through reading the forward of this GEM of a book!! But I wish to emphasize that my(our) awakening began without any knowledge of Eckhart's teaching. The teaching in combination with our connection brought understanding to the Awakening. The Transformation of Consciousness.

Where shall I begin... within this experience there is paradox... The experience is highly personal, and WITHIN THAT, through the awakening...I have come to know that there is NOTHING "personal" in LIFE ITSELF! Life=Love=Who WE ALL ARE.

Check out the original copper pyramid
for enhancing Meditation Practices.