What form of meditation do you find most effective?

You know, this word 'effective' throws me a bit. I personally think of meditation as our natural state, and the practices we are accustomed to calling 'meditation' as tools for showing us that. So I don't really think in terms of 'effects'. But it is true that a lot of different techniques get thrown under this label 'meditation', and they all have different effects. If you want to manage stress, deep breathing techniques are the best.

If you want to manage pain, various energy techniques and visualizations have been shown to work. From a spiritual perspective, I think it is very personal, and we get drawn to whatever we need, based on our intent. For myself, I was drawn to chakra and kundalini work early on. I didn't even know why at the time, it was just where I found myself. Now I understand it as a very personal proclivity of mine.

I see and experience the world as a matrix of energy lines and currents, and always did, from a very young age. So meditating on these energy centers and currents within my own being was and is a natural practice for me. But these techniques are just a starting point, a way of opening the doorway, to our natural state. It can be opened many other ways.

This is all good to hear. To move on to my next question... You speak of being aware of energy centers and patterns at an early age. This can be overwhelming and a little scary. Was this the case for you?

No, as a young child, it was not scary at all. It was just the way the world was. And often it was my sanctuary– this world that was light and fluid. I accepted it at face value, although I did not talk about it much. As young children, I think most of us are very open, and in tune with intuitive layers of awareness and perception.

These close down as we get older, partly because of social and cultural pressures, and partly because of the natural development of our sense of self, particularly as we enter adolescence. And that did happen for me. After that point, when I would have spontaneous experiences and some of the 'old' awareness would break through, I resisted it more, and did develop a fear of it. 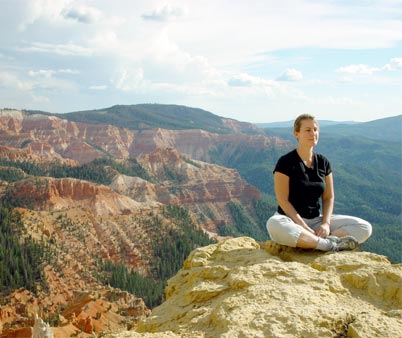 I thought it meant I was weird, that I wouldn't fit in. So I pushed that side of myself away for awhile, and forgot about it. It didn't resurface until I discovered meditation in college, or really several years after that. Then I started to remember those early experiences, and own them as part of who I was.

Can you tell me about your first experiences with meditation in college?

I was initially a dance major in college, and both yoga and Qigong were offered as part of our movement studies. At one point I was having problems with neck and head aches, and I tried everything to get rid of them. The yoga and Qigong classes were the only thing that seemed to help. That really got my attention, and I started to think and wonder more about the mind-body connection.

Then during the summer, a friend took me to an Insight Yoga meditation class, and I had a dramatic experience while meditating on my third eye (the sixth chakra in the forehead). I felt like time and space collapsed, and I was floating in this field of light. I kind of went in and out of this state for a few days afterward. It was really a classic kundalini rising experience, although I didn't know that at the time. It triggered something– it really became the starting point for my conscious spiritual search.

Check out the original copper pyramid
for enhancing Meditation Practices.